Golden Jubilee Diamond - A Diamond in the Rough

Sometimes it's tough to tell an object's beauty at first glance.

This is especially true of colored diamonds. While some stones may not look stunning when first unearthed, after the cutting process, they can transform into astonishing gems. A perfect example of this is the Golden Jubilee Diamond, which happens to be the largest polished brown diamond in the world at a staggering 545.67 carats. While today, there is no denying that this diamond is dazzling, it was not always regarded as so. 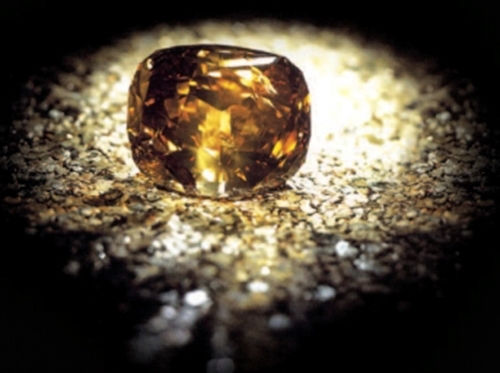 Here's the story behind one of the world's most famous diamonds.

From Royal Past to a Golden Present

Around 1985, The Golden Jubilee was found at the De Beers Premier Diamond Mine in Transvaal, South Africa, which was also the source of other notable diamonds such as the Cullinan, Taylor Burton and Niarchos. In its rough state, the gem weighed 755 carats!

The enormous diamond, which has been graded as fancy yellow-brown - the classic definition of a champagne diamond, was thought to be unattractive, due largely to the deep cracks and minor inclusions.

New cutting technologies had recently been developed, and the unusually large size of the diamond posed a unique opportunity to test them out. De Beers saw great potential in the brown diamond, and aimed to improve its appearance by polishing it with these new tools.

The company contracted Gabriel Tolkowsky, who also worked on the flawless white Centenary Diamond, to cut the gem, which was unnamed at the time. The cutting process took two years, but the wait was inarguably well worth it.

"Within its heart lay a wonderfully mysterious shine that gave the diamond a character unlike any other," he explained, as quoted by 24hgold.

The newly polished gem didn't get quite the publicity and attention it deserved as it was overshadowed by the De Beers Centennial Celebration in 1988. Still, the rose cushion-cut stone was sent to Thailand for an important Thai Board of Investment Exhibition in Laem Chang.

De Beers sold the diamond to Thai businessman Henry Ho in 1995. From there, it was transported to Pope John Paul II, then the Supreme Buddhist Patriarch and later, the High Imam of Thailand, to be blessed.

Then, the Thai Diamond Manufacturers Association presented the diamond to the King of Thailand Rama IX, also known as Bhumibol Adulyadej, as a gift in honor of the 50th anniversary of his coronation in 1997. It was this year that it was named The Golden Jubilee.

Interesting fact: 24hgold explained that the government of Thailand described the gem as a large golden topaz, as the country had been struggling financially and didn't want citizens to be outraged by the purchase.

The Golden Jubilee was originally set to be placed in the royal scepter or one of the royal seals. According to MonoPetro, today it is on display in Bangkok's Royal Museum at Pimammek Golden Temple Throne Hall.

Luxatic estimated that the Jubilee is worth between $4 - 12 million.
However, with the recent price increase of colored diamonds - it could be worth a lot more.

The sheer weight of the diamond is no doubt one of its most awe-inspiring and distinguishing qualities. In an interview with the Natural Color Diamond Association, Henry Ho compared its size to two chicken eggs.

As MonoPetro pointed out, the Golden Jubilee smashed previous records. In fact, it is a noteworthy 15.37 carats larger than the famous Cullinan I.